EXFIRE360 in the atex area

The EXFIRE360 control unit in step with the new ATEX standards

A warm greeting to all our readers and customers, it is not uncommon to see how in the fire & gas systems the detection of flammable gases is underestimated from a certification standpoint, considering it as an appendix to these systems and not as an installation provided with a systemic body and organic product corpus and equally complex with respect to fire detection.

In this regard, the gas detection stations are subject to at least three recently updated standards: the EN 60079-0 standard (applicable mainly to marking parts), whose 2018 edition will soon be harmonized under the Directive 2014/34 / EU; the EN 60079-29-1: 2016 standard, whose full effect will start from December 23 next, and the ISO / IEC 80079-34: 2018, which introduces additional requirements to quality systems according to the ISO 9001: 2015 standard for the specification Ex product management

The CE marking of the power plants according to the Atex Directive is therefore subject to the EU type examination by a notified body for the first two standards, to which to associate the verification of conformity to the type based on the product quality assurance in the annex VII of the Directive by the same body.

The regulatory triad described, with recent updates, therefore implies that the power plants certified according to the 2007 version of the EN 60079-29-1 standard and the 2012 edition of the ISO / IEC 80079-34 require product and system re-certification based on the “major changes” of these rules.

This regulatory framework, which should be completed with the standards EN 50271 (software), EN 60079-29-2 (plant) and with the regulatory set for functional safety (EN 60079-29-3, EN 50402), reveals the importance to choose certified solutions for the detection of flammable gases, although the plants constitute equipment associated with devices installed in potentially explosive areas.

SV has chosen to undertake the process of re-certification of the EXFIRE360 plant according to the rules in the ATEX context since the beginning of this year, in order to reach the approval of its own control unit (called EX2GSI) by the summer of this year.

In this regard, it is worth remembering that the EXFIRE360 is a unique case in the context of firefighting stations, thanks to the multiple certification of the product in the field of CPR (EN 54-2 / ​​4, EN 12094-1) and ATEX (EN 60079-29- 1) which allows the use of a single control unit to manage fire and gas detection systems and automatic extinction. This ultimately allows to design highly complex systems (such as networked systems, or distributed logic), exploiting the modular infrastructure based on the CANBUS protocol of the plant itself.

To find out the details of this system, as well as the opportunities offered by this plant, visit our website (www.svsistemidisicurezza.com), or visit us at the Villa di Serio (Bergamo) office. 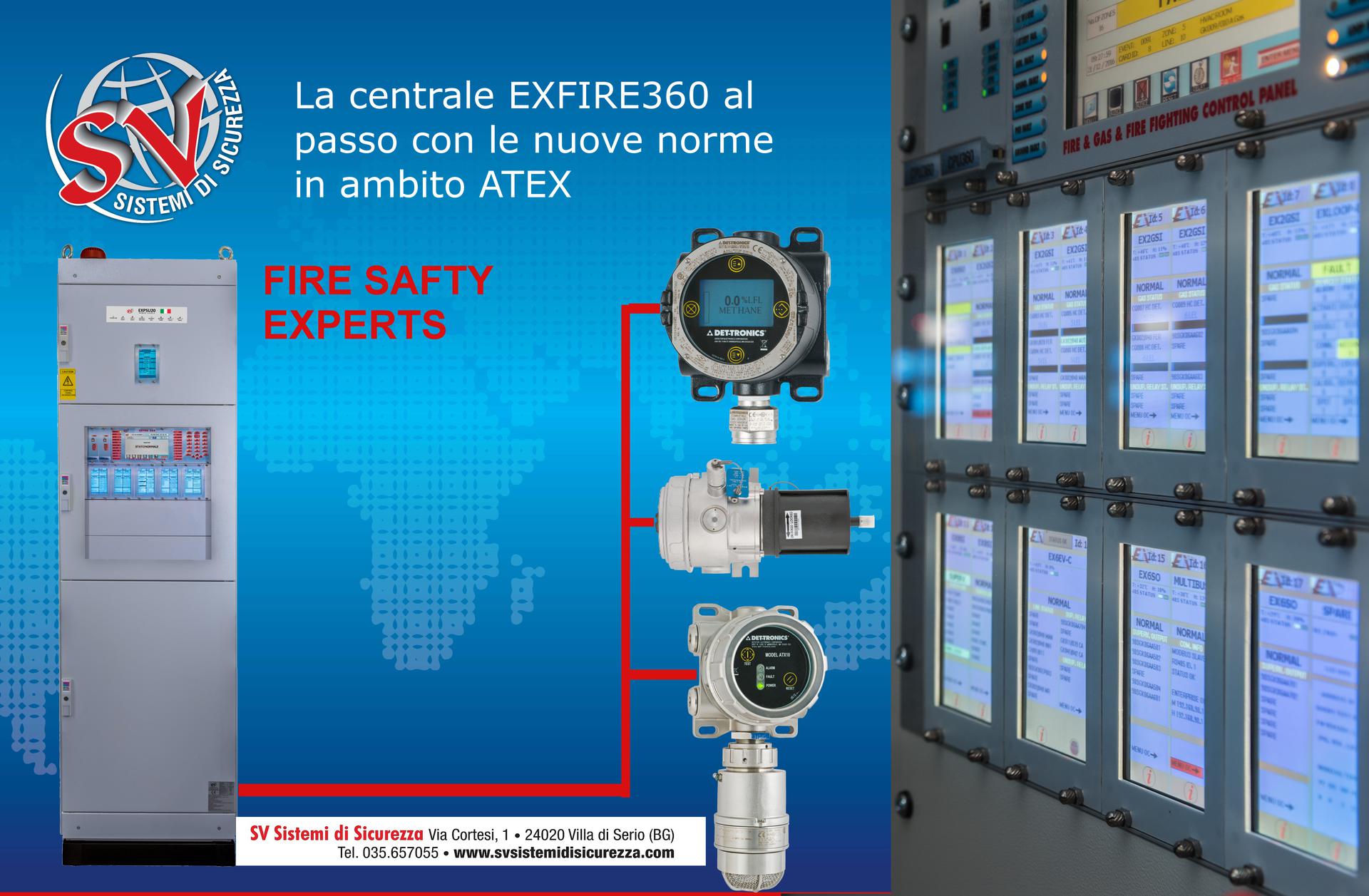